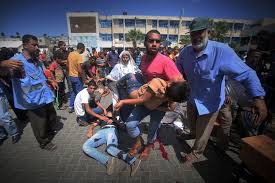 Humanity heaved a sigh of huge relief when UN and US together announced that both Israel and the Hamas had agreed to a 72-hour cease-fire starting from 8 a.m. local time on Friday Aug 1 and that the negotiations between the two sides mediated by Egypt would begin in Cairo the same day. Alas, the relief was short-lived, only 90 minutes. The Israeli airstrike on Sunday (Aug 3) on a UN-run school only confirms the fragility of hope.

The Western media true to its tradition of biased reporting basically said that both sides were accusing each other to be the first to break the ceasefire. This assessment does not tally with what Israel’s military spokesperson Peter Lerner has told the media. According to him, around 9.30 a.m. a small number of Israeli soldiers, possibly three, inspecting a tunnel in the Rafah area were attacked by Hamas militants coming out of the tunnel. One of them had a vest with explosives; he killed himself and two Israeli soldiers; the third Israeli soldier, Hadar Goldin, 23, was missing.

It is important to analyze what has happened and why. Did the Israel Defense Forces (IDF) expect the Hamas fighters to surrender meekly once they were spotted? Did the fighters know that there was a ceasefire? The most important question is: How did any one expect the ceasefire to last when Israeli Prime Minister Benjamin Netanyahu had made it clear that the operation of locating and destroying tunnels would go ahead despite the ceasefire? In other words, was it a ceasefire? It follows that the ceasefire promoters did not think through the implications of Netanyahu’s caveat about the tunnels. END_OF_DOCUMENT_TOKEN_TO_BE_REPLACED