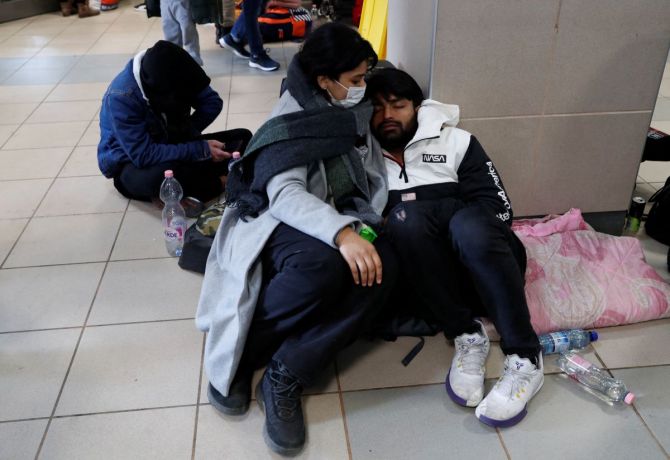 'An ambassador may not be sure whether there would be a war next month, but prudence requires him to take action to see to it that people leave early.'

'Because once the war starts, it will be very difficult to move out.'

The government calls it Operation Ganga -- evacuating Indian students stranded in the war zone in Ukraine.

The prime minister claimed at an election rally in UP that the evacuation was possible only because of 'India's rising power'.

But many in India may not remember that 32 years ago, in 1990, the Indian government conducted one of the largest evacuations ever -- of over 170,000 citizens from Kuwait.

Ambassador K P Fabian was then the joint secretary of the Gulf division at the ministry of external affairs.

In contrast, the Narendra Damodardas Modi government has scrambled to evacuate thousands of Indian students from Ukraine, which is currently under attack from Russia, even sending four central ministers to supervise the exercise.

"I would say it was an error of judgment; India did not anticipate a full-fledged war. In such matters, what is required is prudence," Ambassador Fabian tells Rediff.com's Shobha Warrier about the delay in undertaking Operation Ganga.

How did India conduct such a large evacuation process so efficiently in 1990?

We could manage it because there was synergy between the central government, the state governments, and civil society.

I will give you an example. Indians were in their thousands in Jordan, and when I went to one place, I was told that they were not getting bottled water to drink.

I made a phone call to the Indian Women's Association in Abu Dhabi, the head of which was the wife of the Indian ambassador there.

In less than one hour, a truck load of bottled water came.

This is what I call civil society co-operation. If I had asked Delhi, there will be the bureaucratic issue of first getting a financial sanction to place an order for water.

You know how time consuming it can be when people needed water to drink.

What I want to say is that India as a whole acted with more synergy then.

We also had the freedom to take decisions as we were on the ground.

We also had decided in the beginning itself that we would not charge any money from our nationals.

But this government took that decision only much later, after many students had been fleeced by the airlines.

What I want to say is, decision-making was smoother and faster though we did not have the advantage of e-mails or mobile phones or the Internet.

You mean, centralisation of decision-making should not be there in times like these?

In fact, it should never be there! Yes, certainly not during times like these.

What we require is lateral thinking in problem solving.

I remember one morning, when I was in Amman, the Air India manager came with a long face to breakfast because the Air India crew refused to fly because the passengers reached there very late the previous evening.

They walked out because by the time the flight reached Delhi, they would have been on duty for many hours!

So, the Air India manager had to take care of all the passengers including old people, women with babies, etc.

He wanted me to talk to the civil aviation secretary, foreign secretary, etc, I agreed to think it over.

I concluded that nobody in Delhi would be able to solve the problem.

Instead, I decided to make use of the media. I requested a journalist to write about the exemplary work the Air India crew had been doing.

When the news praising their dedication came out, they had no other choice but stop being rigid about extra working hours!

The challenging part was we could send the flights only to Amman as there was an embargo to fly to Kuwait or Iraq because of UN sanctions.

So, Indians from Kuwait and Iraq had to reach Jordan by road to catch the flight.

Our embassies in Kuwait and Iraq worked with the local community, and it was the community that organised buses to Jordan.

There was perfect co-ordination between the community and the embassies.

In today's scenario, I do not know whether it is there. I am told that the embassy had not mobilised the local community.

Though there is no big Indian community there, there are industrialists in Ukraine.

For example, war is happening in Kharkiv, but there is no consulate there.

So, you have to depend on the Indian community or an Indian company there.

India also had a proper plan for evacuation after Kuwait was invaded.

We tried to see whether it could be resolved through negotiations.

(Then external affairs minister) I K Gujral went to Washington, but came back knowing that the Americans wanted the war.

So, we knew if there was going to be a war, we had to evacuate our people before America started the war to expel Iraq from Kuwait.

And we started the evacuation then itself; we did not wait for the United States coalition to attack Iraq.

What is known as Operation Desert Storm of bombing Iraq started in February 1991 and we started the evacuation process in August 1990 completed much before Desert Storm.

Countries like the US asked its citizens to vacate Ukraine much earlier. Do you think India should have asked the students to come back earlier?

I would say it was an error of judgment; India did not anticipate a full-fledged war.

In such matters, what is required is prudence. If war clouds are gathering, there will be war though you cannot say when.

An ambassador or a joint secretary might not be sure whether there would be a war next month, but prudence requires him or her to take action to see to it that people leave early.

Because once the war starts, it will be very difficult to move out.

They (the students) need not have come to India. Some students might have chosen to wait around in neighbouring countries.

If you are a student, once you reach Warsaw, you may find that you have a friend there, or another good friend or a cousin in another European country.

The GOI should have shown this sort of prudence.

Another thing is, if you check the language of the first advisory, it was quite vague.

An advisory should not say, 'You should consider the pros and cons'... 'Don't stay unless it is absolutely necessary', etc.

An advisory should be very clear; like, 'You should leave immediately.' The language is very important to convey the message.

This article is an interview with Rediff.com's Shobha Warrier. It was originally published on Rediff.com.

The Operation Ganga started too late & has a conceptual weakness.

The tragic death of Naveen, 21, from Karnataka has focused national attention on the plight of the Indian students held up in Ukraine where the Russian military is meeting resistance, perhaps unexpected, from Ukrainian military and the civilians armed by President Zelensky. It appears Naveen, who went out to buy essentials, got caught in the cross fire. His parents are anxiously waiting for his mortal remains.

The key question is: who are the men responsible for the Ukraine crisis?

Three men are responsible for the war that has killed hundreds of human beings and compelled over 600,000 people to flee their country, not to speak of the threat of a nuclear war after Putin put his nuclear weapons on high alert.

If Presidents Putin, Biden, and Zelensky had behaved responsibly the course of history might have taken a different turn. Putin is right in demanding that no NATO missiles should be deployed in Ukraine. He has taken the same stand as Kennedy took in 1962. The crucial difference is that Kennedy and Khrushchev had the wisdom and diplomatic skills to negotiate their way out of a crisis that could have led to a nuclear war. President Zelensky seems to more interested in projecting his heroism than in seeking a conditional cease-fire to be followed up by serious negotiations.

Let’s focus on the plight of the Indian students. There were about 19,000 of them in Ukraine, most of them studying medicine. That tens of thousands of young Indians have to go out to study medicine shows a serious policy failure on the part of successive governments in India. When I was Deputy Secretary, way back in the early 1970s, Malaysia offered to fully fund the establishment of a medical college anywhere in India provided they got 50 seats. I recommended the proposal to our Ministry of Education. They shot it down saying there was no ‘provision’ for permitting a foreign government to fund a college in return for a certain number of seats for their nationals.

As regards Ukraine, it seems there was no contingency plan with the Embassies in Ukraine and in the neighbouring countries. Perhaps, Ministry of External Affairs had not sent out the instructions? Considering that India has carried out evacuations in the past, including the one in 1990 when over 176,000 Indians were airlifted from Jordan, it is surprising that no contingency plans were made. In 1990, the Ministry had a plan to evacuate the entire Indian community from the Gulf in case, for any reason, their stay became unsafe. We thought that if Iraq invaded Saudi Arabia, the Indian community there should be evacuated. In the case of Ukraine, it seems the government was taken in by surprise. The correct approach is to be prudent and act in good time. Even the first advisory from the Embassy could have been worded better.

The Operation Ganga started too late and has a conceptual weakness. It is aimed at bringing every Indian student to India as Prime Minister Modi has explained. What is important is to take them out of Ukraine. It does not matter whether they stayed in the neighbouring countries or came back all the way to India.

Another question is whether the Indian community was mobilised in Ukraine and the neighbouring countries. We have not come across reports of such mobilisation. In 1990, it was possible to arrange for a truck load of bottled water to be supplied to Indians held up in Amman by making a single phone call to the president (Ambassador’s wife) of the Indian Women’s Association in Abu Dhabi.

The control room in MEA works 24/7 with a total strength of about 100, so that, at any given time, there are 20 personnel headed by a Director level officer. The Embassies in Ukraine and neighbouring countries too have been strengthened up to a point.

At present we have about 3,000 students in Kharkiv and Sumy. Both are close to Russia. When the war started, the Russian military was able to prevail and India had requested Russia to arrange for safe passage of Indians. But, soon, the military situation changed quickly to the disadvantage of Russia. We can only hope Russia will cooperate if it regains control of the area.

The dispatch of Ministers was not necessary. Our Ambassadors are capable of handling the matter. Moreover, it is unfair to impose on them the extra burden of looking after a minister. Is it part of public relations to have dispatched the ministers? Even the deployment of IAF is more a publicity stunt as Air India has enough capacity.

Let us hope that, sooner rather than later, the three presidents would have the good sense to arrive at a conditional cease-fire to be followed by negotiations. It will be in the interest of Ukraine to have the negotiations within the framework of OSCE (Organization for Security and Cooperation in Europe) rather sit opposite Russia.

This article was written by K.P. Fabian for madrascourier.com, where it first appeared.