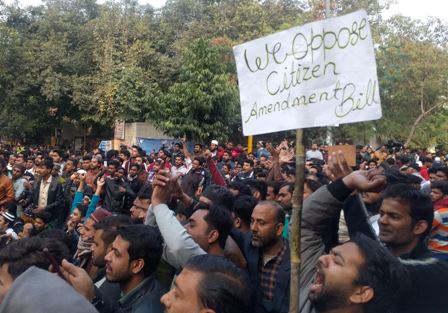 The CAA 2019 has weakened India's democracy & diminished the country in the eyes of the international community.
What is most striking and heartening about the widespread demonstrations against the CAA (Citizenship Amendment Act 2019) and the NRC (National Register of Citizens) is that citizens from practically all walks of life, cutting across many a divide, are united in fighting to preserve the idea of India enshrined in the 1950 Constitution. The young and the old, lawyers and teachers, have come out onto the streets, often ignoring Section 144 prohibiting such gatherings. This shows that many have shed their fear of the police, despite the deplorable brutality exhibited by the latter. This is the case in Jamia Milia University, established in 1920 by a group of eminent Muslim leaders with support from Mahatma Gandhi and Rabindranath Tagore. It is easy to demonstrate that the CAA 2019 violates article 14 of the Constitution. The CAA states that “any person belonging to Hindu, Sikh, Buddhist, Jain, Parsi or Christian community from Afghanistan, Bangladesh or Pakistan, who entered into India on or before the 31st day of December 2014” is entitled to be registered as a citizen of India subject to certain conditions.

"The State shall not deny to any person equality before the law or the equal protection of the laws within the territory of India.”

The reader will note the words “any person” include Indian citizens and all other persons. Obviously, because it explicitly excludes the Muslims, the 2019 Act can be declared ultra vires of the Constitution by the Supreme Court. Whether India’s Supreme Court will do that or not is a different question which we need not examine here. But the President of India could have sought legal clarification before giving assent. Let us take note that the bill in question was not properly deliberated upon in the Parliament. It was introduced in the Lok Sabha on December 9, 2019, and passed on December 10, 2019. Again, it was introduced in the Rajya Sabha on December 10, 2019, and passed the next day. The President signed the Act on December 12, 2019. A democracy where the legislature does not spend adequate time to study and discuss important bills is not the best. There is another flaw in the 2019 Act. It violates the spirit of the Constitution. Let us recall the opening words:

WE, THE PEOPLE OF INDIA, having solemnly resolved to constitute India into a 1[SOVEREIGN SOCIALIST SECULAR DEMOCRATIC REPUBLIC] and to secure to all its citizens….

In short, India is a secular republic, and, as such, to admit non-nationals into citizenship based on religion is not admissible. However, we should bear in mind that the R.S.S (Rashtriya Swayam Sevak Sangh) that begat the B.J.P. (Bharathiya Janatha Party) had disapproved of the 1950 Constitution, and refused to salute the flag. Obviously, now that the R.S.S. is in power, it wants to establish a Hindu Rashtra advocated by its leaders, decades before India wrested freedom from the British by waging a non-violent struggle under the leadership of Mahatma Gandhi. The reader will recall that the R.S.S. did not join that struggle and one of its followers assassinated the Father of the Nation. The projected NRC is an absurdity. It will mean 1.3 billion Indians have to prove their nationality. We know that over a hundred people died standing in line when the mad scheme of demonetisation inflicted upon the nation by the Modi government. Moreover, it makes it possible to target the minority communities and makes things difficult for them when it comes to registration in the N.R.C. This is in what KB Hedgewar, the founder of RSS wrote:

We (Hindus of India) do not say that others should not live here. But they should be aware that they are living in Hindustan of Hindus.

Obviously, the Modi government did not anticipate widespread protests. We may remark that any competent government is expected to think through the pros and cons of the decisions it takes beforehand and that potential consequences are always included in the pros and cons. What is most distressing about the reaction of the government to the protests is the uncalled for police brutality, often directed against peaceful protesters. In several cases, non-protesters (as in the case of the library at Jamia where students preparing for the civil service examinations) were beaten up. In Utter Pradesh, 17 human beings have died, and the Director-General of Police has claimed that the police never fired a bullet. How does one square this circle even as the social media and the mainstream media have shown videos of policemen shooting? Coming to Government’s response to foreign criticism, External Affairs Minister Dr S Jaishankar, on a visit to Washington, refused to meet the House Foreign Affairs Committee (HFAC) as the latter insisted on inviting Indian-origin Congresswoman, Pramila Jayapal. Jaishankar, with or without consulting the capital, refused and the HFAC called off the meeting. Was it wise to refuse to meet a Congresswoman just because she had introduced a motion critical of India’s action in Kashmir? The number of co-sponsors for the motion has gone up. However, in the Indian social media, there is much support for Jaishankar. Rajeev Chandrasekhar, an M.P. of the ruling B.J.P. tweeted, “We hv no objections to @PramilaJayapal mumbling to herself or even to u on stuff she knows nothing abt.” Are some Indians getting more and more arrogant? We might note, en passant, the cancellation of visits by Bangladesh ministers, foreign and home. Delhi had argued that there was persecution of the Hindus in Bangladesh to justify the CAA 2019. Later, the Ministry of External Affairs offered a clarification to assuage Dacca, but the damage had been done. Would the Ministry of External Affairs arrange for a course on how to speak on foreign policy matters for Members of Parliament, including ministers, especially of the ruling coalition? The Malaysian Prime Minister Mahathir, 94, criticised India on Kashmir some weeks back, and Delhi had responded by punishing Malaysian companies. He has once again criticised Delhi on CAA 2019, and Delhi’s reaction has been rather sharp. The business of diplomacy is to prevent unnecessary aggravation rather than hit back and claim applause from the media. The grand pro-Modi coalition is showing cracks. The Shiv  Sena in Maharashtra walked out and joined hands with the Congress and the N.C.P. of Sharad Pawar to form government in the state. The Shiv Sena might have supported the B.J.P. on the CAA but for its alliance. Chief Ministers, Nitish Kumar of Bihar and Patnaik of Odisha, both allies of the B.J.P., have declared that they would not have the NRC exercise in their respective states. It was West Bengal Chief Minister Manta Banerjee who first announced her decision to refuse NCR. Currently, 10 Chief Ministers have declared their decision to ditch the NRC. What can the Union Government do? Dismiss the state governments and impose President’s rule? Legally that is possible, but politically it will be a big blunder. What might happen next? B.J.P. has the option to go back to the Parliament and revoke the CAA 2019, a development most unlikely, though it will be good for India. Modi has blamed the Congress and the rest of the opposition for misinforming and misleading people. The B.J.P. has planned a big reach-out programme to get across to 30 million citizens, with 250 press conferences and more. Will it retrieve the lost ground by going slow or abandoning the NRC? Doubtful. On the other hand, the demonstrations might gradually die down unless further police brutality adds fire to fuel. In conclusion, the CAA 2019 is an ill-starred move. It has damaged India and weakened its democracy, and it has diminished India in the eyes of the international community. One can only wish that India will wake up from this bad dream as soon as possible. Or, is it a vain hope? The above article written by Ambassador K.P. Fabian was initially published on madrascourier.com Credits:-https://madrascourier.com/opinion/the-catastrophic-caa-nrc-imbroglio/